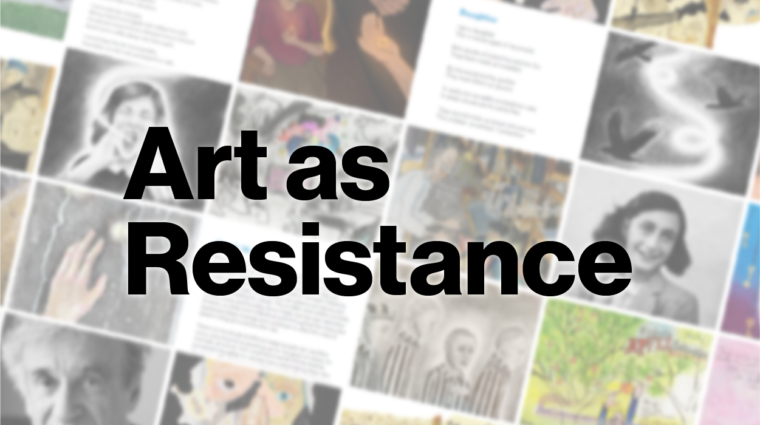 The Art & Writing Competition seeks to educate students in 7th-12th grade about the Holocaust, engage them through Anne Frank and Elie Wiesel’s profound stories, and empower them to move from thought to action using creative expression.

In 2023, we will additionally take inspiration from the artwork of Erich Lichtblau-Leskly, as featured in the temporary exhibit “To Paint is to Live.” Any student, regardless of age, will be able to respond to any prompt, or multiple prompts.

Funding is available for those who need assistance mailing their art pieces to The Holocaust Center. Contact competition@holocaustcenter.org for more details.

Welcome to the 7th annual Kappy Family Anne Frank Art & Writing Competition at The Zekelman Holocaust Center. Our family is a proud sponsor of this contest that is designed to inspire and empower students to gain an understanding of the power of memory. Anne Frank serves as an important symbol of an individual that portrays the lessons of the Holocaust.

A sapling of the actual chestnut tree that grew outside of her attic window stands at The Holocaust Center today, resolute in its determination to withstand the forces of prejudice and bigotry. Anne Frank was wise beyond her years, and her observation “that nobody need wait a single moment before starting to improve the world” has inspired today’s wonderful contest submissions that prove the impact of the power of memory.

Our father, Garry Kappy, is the last surviving member of his family. Born in Opatow, Poland, he was imprisoned in different labor camps at the young age of 15, where he dug ditches and slaved in a steel ammunition factory. He survived the horrors of Buchenwald and Auschwitz and managed to eventually make his way to Detroit where he had a family with his beloved wife Viola, and a successful business career.

Though it is important to Garry to memorialize all of the victims of the Holocaust, he feels that it is even more crucial to educate others in order to help prevent future genocides. Out of this inspiration, the Kappy Family Anne Frank Art & Writing Competition was born.

Our family is honored to sponsor the High School Division of The Art & Writing Competition in memory of Raphael (“Rafi”) Schwartz, a Holocaust survivor and longtime resident of the Detroit area. Rafi taught hundreds of metro-Detroit students, both as a b’nai mitzvah tutor and as a teacher at the United Hebrew High School. As a teacher, he would have appreciated the willingness of students to engage personally with the history of the Holocaust.

Rafi Schwartz (formerly Berger) was born in 1932 in Ludmir, Poland. The Germans invaded Ludmir in 1941, establishing a ghetto there in 1942. Twenty-five thousand Jews were forced into a few blocks fenced with barbed wire, an area which shrank as Jews were rounded up, taken to the forest, forced to dig large pits, stripped, and shot. Ten year old Rafi was forced to sort through the clothing of those who had been shot.

The Germans killed all but seventy Jews in Ludmir, and, among them, only two families survived intact – Rafi’s and one other. Even so, they lost almost everyone they knew before the war. Rafi and his family survived by moving from one hiding place to another, hiding in root cellars, barns, and haystacks. Ultimately, the family spent months lying in the dark in a small pit they had dug underneath a large building.

After the war ended, there were still violent attacks against Jews, so the family changed their name from Berger to Biernatzky and pretended to be Catholic. Rafi’s aunts in Palestine managed to send immigration certificates to Poland bearing the name “Schwartz,” and, in 1947, the family arrived in Palestine.

Although Rafi had only a few years of school, he graduated from an Israeli high school in 1952. He served as an officer in the  Israeli Army and came to Detroit to study engineering. He said that America was the only country to which a person could come with only the clothes he was wearing, without knowing the language, and become successful. He graduated as a mechanical engineer in 1963 and worked at Chrysler for his entire career.

Despite everything, Rafi lived a good life. He married, had three children, and six grandchildren. He loved sailing and going to the beach at Kensington Metropark. He retired to Florida and almost immediately began teaching Hebrew at a local synagogue. Rafi died of COVID in 2020.

Since 1992, the Nissan Foundation has awarded nearly $14 million to more than 150 organizations offering educational programs that promote cultural understanding that leads to acceptance and appreciation of differences. […]

The Nissan Foundation was created as a direct response to the civil unrest that followed the Rodney King trial verdict that occurred near Nissan North America’s then U.S. sales operations in Southern California. In each of the 30 years since, the Nissan Foundation has awarded grants to nonprofits supporting the foundation’s mission to build community by valuing cultural diversity.

“The Nissan Foundation is proud to partner with these 33 organizations, each working to build inclusive communities in their corner of the world,” said Parul Bajaj, Executive Director of the Nissan Foundation. “As a society, there is so much we can learn from each other, an ideal our grantees live by. We look forward to seeing how their programming comes to life in the coming year.”

As part of its 30th anniversary commemoration, the Nissan Foundation has shared the work of many of its grantees through written and video storytelling. Among these nonprofits is the Zekelman Holocaust Center, which will use its 2022 grant to engage students, educators and families through visual art, giving these audiences fresh and challenging ways to think about the Holocaust, its causes and impact on people’s lives. […]

“The grantee stories we’ve shared during our anniversary year are a rich representation of the important work all of our grantees undertake to influence how people view others of different races, ethnicities and cultural backgrounds,” Bajaj noted. “It has been a truly moving experience to be a part of telling these stories.”