The Book Smugglers: Partisans, Poets, and the Race to Save Jewish Treasures from the Nazis

“Would you risk your life to save a book?” That is the underlying question of The Book Smugglers: Partisans, Poets, and the Race to Save Jewish Treasures from the Nazis. The exhibition was curated by Holocaust Museum Houston and based on the book of the same name by David E. Fishman.

The Book Smugglers is the nearly unbelievable true story of ghetto residents who rescued thousands of rare books and manuscripts by hiding them on their persons, burying them in bunkers and smuggling them across borders. Set in Vilna, Lithuania, also known as the “Jerusalem of Lithuania” for their robust Jewish culture rich with art, music, literature, poetry, theater and opera, a small group of partisans and poets risked everything to save Jewish cultural treasures.

The Girl in the Diary: Searching for Rywka from the Lodz Ghetto

The Girl in the Diary: Searching for Rywka from the Lodz Ghetto is a special exhibit based on a diary discovered in Auschwitz-Birkenau after WWII. It offers a moving glimpse into lives interrupted by the Holocaust. Created by the Galicia Jewish Museum in Krakow, Poland in cooperation with the Jewish Historical Institute in Warsaw. Open July 29 through December 2021. 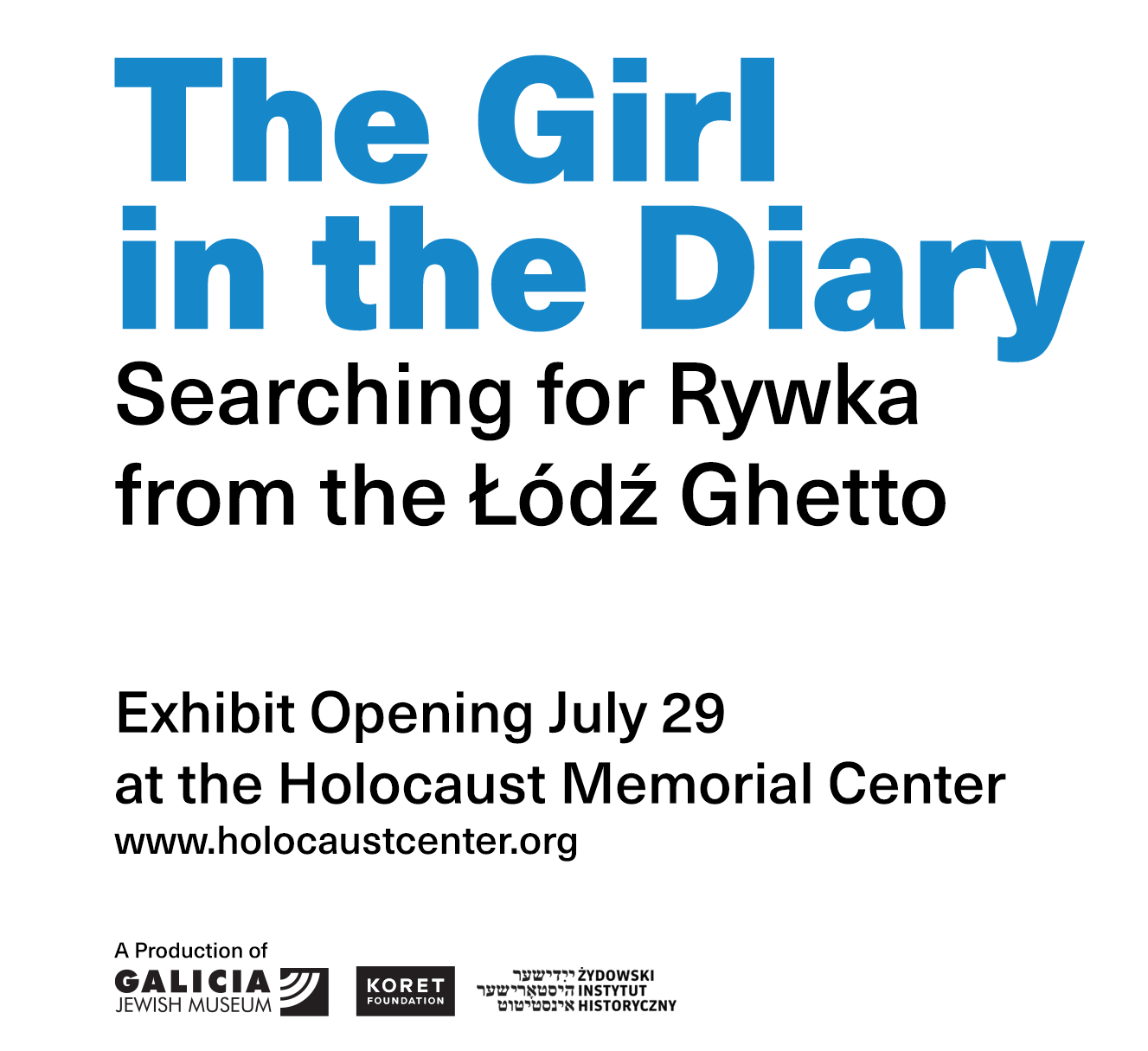 From 1933 to 1945, Nazi Germany carried out a campaign to “cleanse” German society of people viewed as biological threats to the nation’s “health.” Enlisting the help of physicians and medically trained geneticists, psychiatrists, and anthropologists, the Nazis developed racial health policies that started with the mass sterilization of “hereditarily diseased” persons and ended with the near annihilation of European Jewry. Deadly Medicine: Creating the Master Race traces this history from the early 20th-century international eugenics movement to the Nazi regime’s “science of race.” It also challenges viewers to reflect on the present-day interest in genetic manipulation that promotes the possibility of human perfection.

Operation Finale: The Capture & Trial of Adolf Eichmann uncovers the secret history of one of the 20th century’s most sensational events, the capture and trial of Nazi war criminal Adolf Eichmann. As head of the Nazis’ homicidal “Jewish Department,” Eichmann zealously managed the transport of millions of innocent people to death camps and vanished after World War II. Operation Finale—the code name of Israel’s effort to find Eichmann—reveals how agents of Mossad, Israel’s national intelligence agency, located him in hiding in South America years after the war, then abducted and smuggled him out of the country to stand trial in Israel. The exhibition features recently declassified materials including 1960s-era artifacts, photographs, film, audio, contemporary design elements, and interactive displays.

As told in Operation Finale, Eichmann’s story is one of the most fascinating and somber stories of World War II. Visitors will be transported to the courtroom of Eichmann’s trial in Jerusalem through an immersive video, complete with a replica of the iconic glass booth in which the accused sat as his courtroom drama was broadcast around the globe as a principal perpetrator of the Final Solution. Eichmann’s conviction and sentence to death by hanging, Israel’s only judicial execution, began a new chapter for Holocaust survivors to speak out about the atrocities they endured. The exhibition concludes with the legacy of the trial and how the mantra “Never Again” must ring out around the world.

Kindertransport: Rescuing Children on the Brink of War 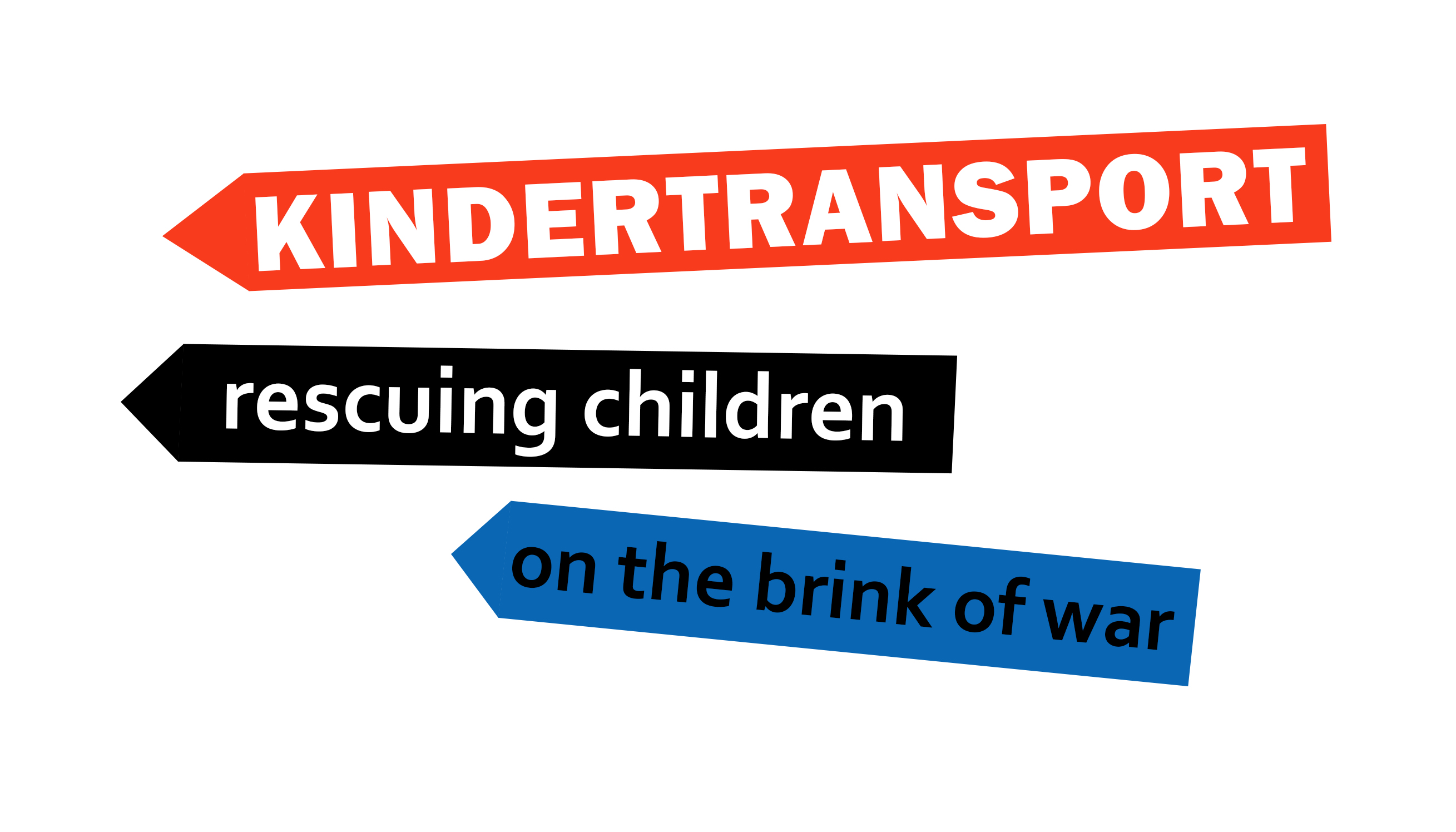 Created by Yeshiva University Museum and the Leo Baeck Institute, the exhibition illuminates the story of the Kindertransport (German for “Children’s Transport”), the organized rescue effort that brought thousands of Jewish children from Nazi Europe to Great Britain in the late 1930s.

The exhibition explores the children’s difficult and often heartbreaking journeys through original artifacts, personal stories, and engaging media. Artifacts from local Detroit Kinder are included in this captivating exhibit. Kindertransport – Rescuing Children on the Brink of War is open Sunday-Friday during regular operating hours of The HC and is included with museum admission or membership.

Aftermath: Detroit Jews in the Wake of the Holocaust

The Holocaust ended with the demise of Nazi Germany, but the effects of this horror were just beginning.  This exhibit shows how Detroit Jews dealt with the loss of loved ones, and provided support for survivors, children and displaced persons at the end of World War II as reported in the Detroit Jewish Chronicle and Detroit Jewish News.  It is a story of a community-wide effort to deal the critical issues in the immediate aftermath of the Shoah.

Attitudes and Actions: Where Prejudice Can Lead – An Exhibit in 3 Parts 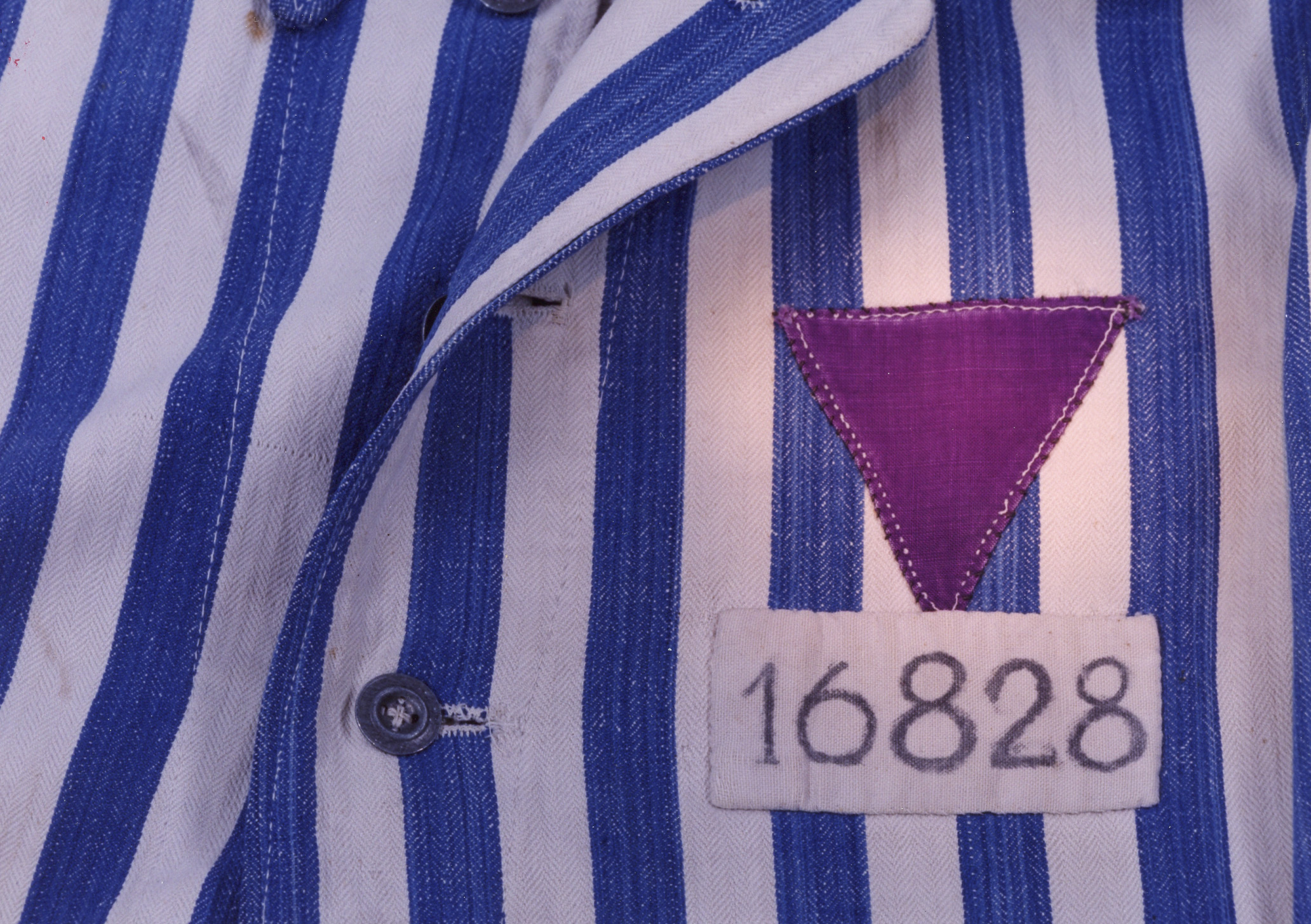 Jehovah’s Witnesses: Faith Under Fire: Would you have resisted the Nazis? Jehovah’s Witnesses were persecuted and executed for refusing to conform to the Nazi ideology of hate. This exhibit provides an in-depth look at ordinary people who followed their conscience in the face of tyranny. From the Arnold-Liebster Foundation of Germany. Rwanda: Personal Images: This series of mesmerizing pastel drawings about the Rwandan genocide by artist Vivian Bower encourages viewers to reflect on the words “Never Again” and to think about their impact in a world where other genocides continue to take place. From the Florida Holocaust Museum. The Tragedy of War: Japanese American Internment: During World War II, 120,000 Japanese Americans were forced into a series of camps to live under armed guard. Two-thirds of them were American citizens. Their stories and unjust confinement come to life in this exhibit. From the Kennesaw State University Museum of History and Holocaust Education in Georgia.

Filming the Camps: from Hollywood to Nuremberg

Directors John Ford, Samuel Fuller and George Stevens created classics like The Grapes of Wrath, Shane and The Big Red One. They also filmed the liberation of the Nazi concentration camps. This powerful exhibit explores these filmmakers’ experiences during and after WWII, their confrontation with Nazi atrocities, and the mark it left on them as artists. Open Sunday through Friday; included with admission.

The exhibition, curated by historian and film director Christian Delage, was designed, created, and distributed by the Mémorial de la Shoah (Paris, France), and made possible through the generous support of SNCF. Learn More.

The Holocaust Unfolds: Reports from the Detroit Jewish Chronicle and Jewish News

Unlike mainstream media – including the Detroit Free Press and the New York Times – the Detroit Jewish News and its predecessor publication, the Detroit Jewish Chronicle, continuously reported on the rise and fall of Nazism. View reports from Hitler’s ascension to power through the destruction of European Jewry to the trial of Adolph Eichmann. This exhibit debunks the myths about what was known and when. Learn More.

Exhibit made possible by the Detroit Jewish News Foundation.

The Wartime Escape: Margret and H.A. Rey’s Journey From France

More than three generations of Americans have grown up reading the stories of an irrepressible little brown monkey known in this country as “Curious George.” But few people know about the incredible journey made by his creators, Margret and H.A. Rey, to escape the Nazi invasion of Paris at the start of World War II. Stashing a few precious belongings and manuscripts in their knapsacks and the baskets of their bicycles, the Jewish couple fled Paris in June 1940, starting a five month odyssey by bike, train, and boat that would eventually bring them to American shores.

The Wartime Escape: Margret and H.A. Rey’s Journey From France tells the story of the Rey’s journey, featuring 25 framed art prints by artist Allan Drummond and supplemental archival images from the extraordinary holdings of the DeGrummond Collection of Children’s Literature at the University of Southern Mississippi. The exhibition is based in part on the 2005 publication, The Journey that Saved Curious George: The True Wartime Escape of Margret and H.A. Rey, written by Louise Borden and illustrated by Allan Drummond (Houghton Mifflin Company, New York).

More than just the tale of a rousing escape from occupied France, this exhibition celebrates a timeless survival story, one that serves as a potent reminder of the power of human creativity and the cost when voices and visions are silenced by the impact of war.

Fresh from a tour at the National Museum of American Jewish History in Philadelphia, this dramatic and moving exhibit expresses the artist’s reaction to Holocaust sites in Poland and Ukraine. Also on exhibit were several sculptures by Holocaust Center Survivor Speaker Henry Friedman. Learn more.

Stitching History from the Holocaust

In 1939, Paul Strnad wrote to his cousin Alvin in Milwaukee, Wisconsin. Desperate to obtain an affidavit to escape the onslaught of Nazi Germany, Paul sent Alvin sketches of his wife Hedwig’s (Hedy’s) dress designs. Paul and Hedy hoped that these examples of her work would provide evidence of their financial independence. Despite Alvin’s best efforts, both Hedy and Paul were murdered in the Holocaust. The JMM worked with the Costume Shop of the Milwaukee Theater to create the dresses from Hedy’s sketches and to put together this exhibit exploring her life and work.

Stitching History from the Holocaust and the eight beautiful dresses represent the incalculable loss caused by the Holocaust, in this moving exhibit on loan from the Jewish Museum Milwaukee (JMM).

Anne Frank: A History for Today 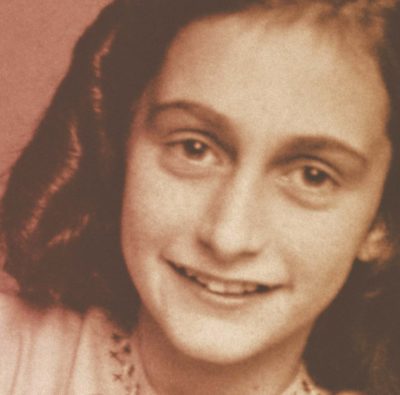 This powerful exhibit, developed by the Anne Frank House and sponsored in North America by the Anne Frank Center for Mutual Respect, tells the story of the Frank family before, during, and after the rise of the Nazis. It shows how people were persecuted by political decisions and by the actions of individuals, and it depicts individuals who chose to become perpetrators, those who were bystanders, and those who were willing to resist Nazi tyranny. Learn more. 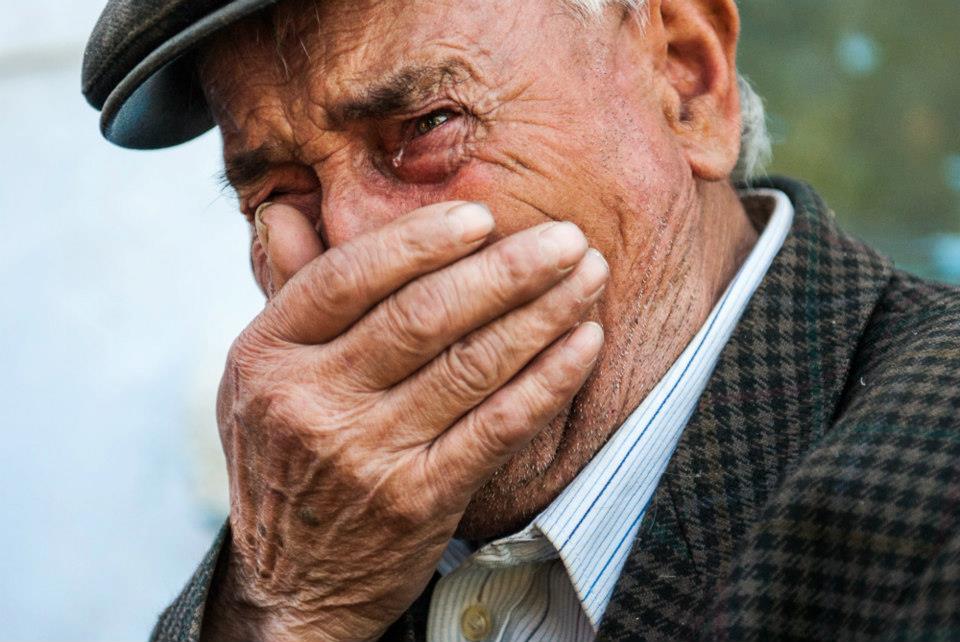 This powerful exhibit showcases Yahad-In Unum’s investigation of the mass executions of more than 2.2 million Jews and Roma in Eastern Europe by Nazi mobile killing units. They have identified 1,893 execution sites in 7 countries and gathered 4,714 videotaped eyewitness testimonies. Led by Director Marco Gonzalez and Founder and President, Father Patrick Desbois, Yahad-In Unum’s historic undertaking ensures that these victims won’t be forgotten and will be respectfully memorialized. Learn more. 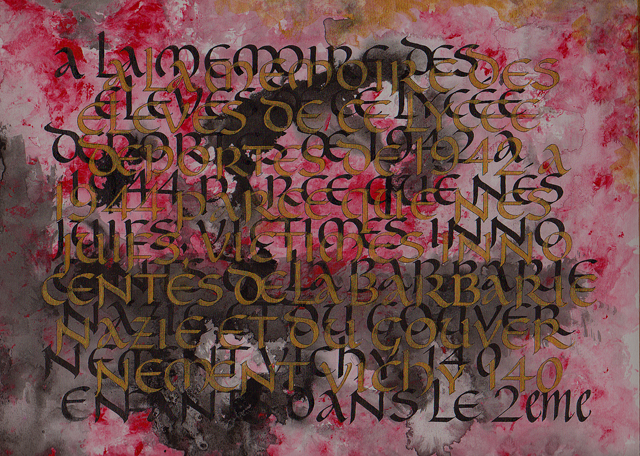 Eleanor Winters’ delicate yet powerful calligraphic artworks evoke the memory of the 11,400 French Jewish children who were deported – and the vast majority murdered – between 1942 and 1944 through the complicity of the Vichy Government.

Inspired by the plaques erected throughout Paris, the poetic phrasing of the exhibit reflects an almost tangible sorrow and shame through which the artist’s message shines: Ne les oublions jamais (We must never forget them). Learn more.