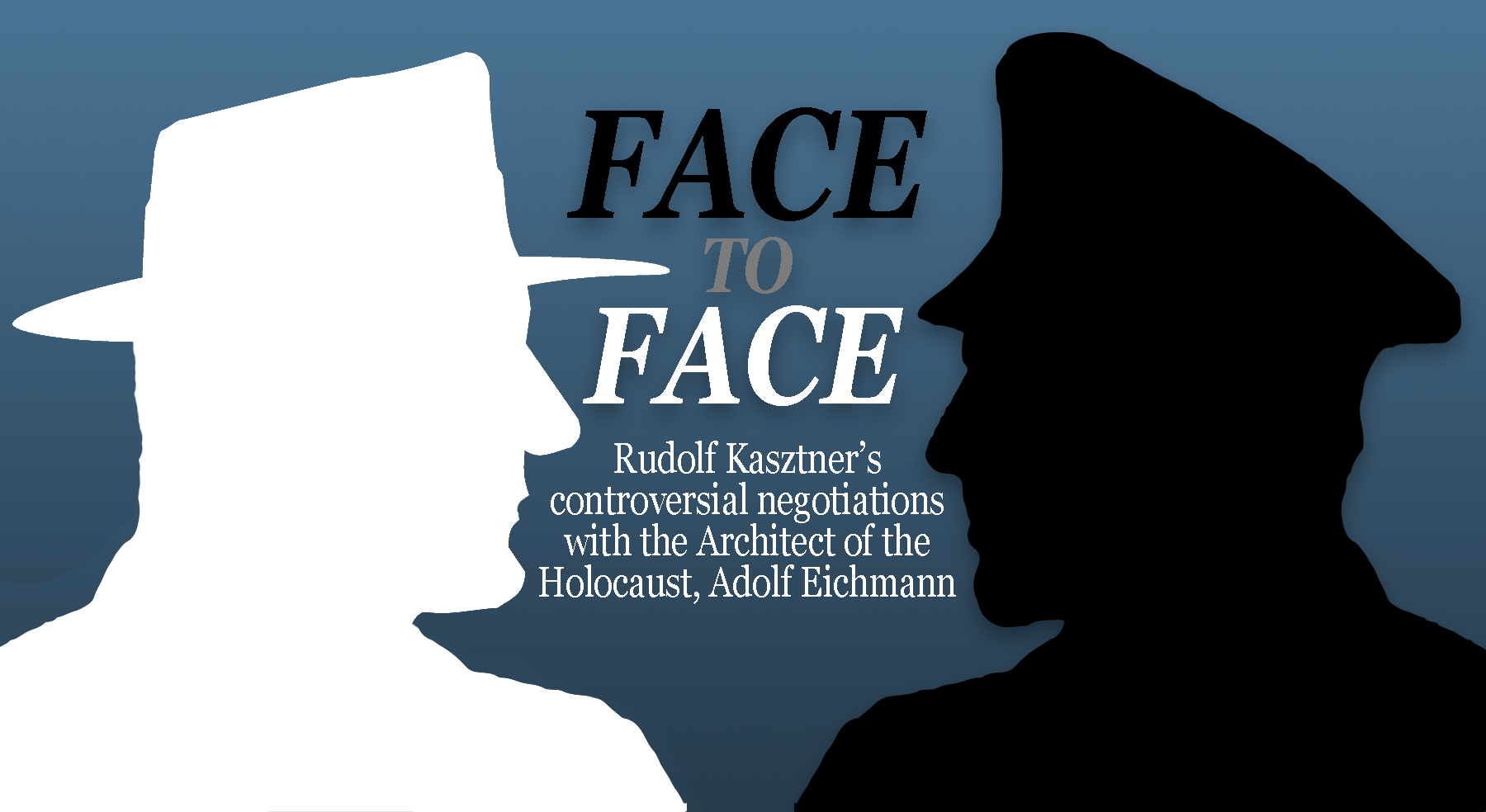 The entire story of Rudolf Kasztner and his role in rescuing over 1,600 Hungarian Jews is quite complex. It also offers an extraordinary example of face-to-face negotiations between a representative of the Jewish community and the main architect of the Holocaust, a man who was in charge of implementing the “Final Solution,” Adolf Eichmann. Even more extraordinary is that Kasztner, some have alleged, knew that the Nazi deportations were not a “relocation,” a common falsehood that the Nazis spread to the Jewish populations, but rather extermination. Kasztner was negotiating to save himself and his neighbors from certain death.

The original plan involved Rudolf Kasztner and others negotiating with Adolf Eichmann on a deal to ransom 1 million Hungarian Jews for 10,000 trucks and supplies needed by the German army. This plan never came to fruition, and it is not clear that Eichmann was ever truly serious about the exchange. Nonetheless, during the summer of 1944, Kasztner continued negotiations with Adolf Eichmann with the goal of saving at least some Hungarian Jews from the Nazi deportations to Auschwitz. An agreement was reached that 1,684 Jews would be spared for a ransom of $1,000 per head, put on a train, and given safe passage to neutral Switzerland. Most of the passengers could not raise the funds themselves, so Kasztner auctioned off 150 seats to wealthy Jews in order to pay for the others.

“Kasztner’s Train” left Budapest on June 30, 1944 in the height of the Nazi deportations of Hungarian Jews to Auschwitz. On July 8, 1944, the train arrived at the Bergen-Belsen concentration camp in Germany. The passengers remained there until they were transported in two groups to Switzerland in August and December 1944. Unfortunately, this successful rescue became enmeshed in controversies even as it was happening.

The Tyranny of Choice-less Choices

These controversies include the fact that while Kasztner’s negotiations were in progress, Alfréd Wetzler and Rudolf Vrba escaped from Auschwitz. They wrote what became known as the Auschwitz Protocol which detailed the Nazi plans for the extermination of the Hungarian Jews. The report was released to the leaders of Jewish organizations in the hope that Hungarian Jews would be warned that they were being deported to a death camp and were not being resettled, as they had been led to believe. However, the report was not made public by the Jewish Council in Hungary or by Kasztner. Later, Rudolf Vrba wrote that “Kasztner paid for those 1,684 lives with his silence.” Eventually, the report reached Switzerland where it was published. The resulting international outcry was one of the factors which led the Hungarian government to defy the Nazis by stopping the deportations to Auschwitz.

Paul Bogdanor, the author of the 2016 book Kasztner’s Crime, alleged that Kasztner knew that the trains from the Hungarian ghettos were taking their victims not to a resettlement site — as the Jews had been told — but to the gas chambers in Auschwitz. Yet he ordered his committee to send messages to the ghettos telling local Jewish leaders to prepare their communities for agricultural work in the countryside. By doing so, Kasztner guaranteed that there would be no significant escape attempts.

As noted by Bogdanor and others, Kasztner has been blamed for not warning the Hungarian Jewish community that they were being shipped to their deaths. The argument assumes that had the Jews been warned then they could have taken some action to resist or escape their fate.

Others argue that Kasztner could not have saved a significant number of Jews by any such warning. The Jews were tightly controlled and under constant observation by German and Hungarian secret police. Without weapons, military experience or civil rights, and surrounded by their enemies, the Jews were in no position to organize resistance or mass escape.

A major problem in assessing Kasztner’s conduct is the fact that Kasztner helped to draw up the list of those who were going to be saved on the train. Critics have asserted that Kasztner disproportionately favored Jews who were well connected and privileged, including his relatives and friends, rich Hungarian Jews and community and Zionist leaders. Supporters of Kasztner have noted that the passengers also included orphans, students, workmen, teachers and nurses.

The fact that Kasztner may have acted out of self-interest does not negate the fact that he saved over 1,600 lives. It is possible to view Kasztner as no different than the myriads of other Jews who were faced with the Nazi practice of forcing “choiceless choices.” He had to choose between saving 1,600 Jews under less than ideal circumstances or risking those lives, along with his, in an heroic, but likely futile effort to save an unknowable number of Hungarian Jews by warning of their impending deportation and death.

After the war, Kasztner moved to Israel, and became active in the Mapai party. However, in 1953, he became embroiled in a libel case accusing him of collaborating with the Nazis. The lower court found that Kasztner had, in fact, been a collaborator. In 1958, the Supreme Court of Israel overturned most of the judgment against him. This decision was of little use to Kasztner, however, because on March 4, 1957, he was shot and killed outside his Tel Aviv home. The attack was carried out by veterans from the pre-state right-wing militia Lehi (also known as the Stern Gang).

The Katzner story clearly illustrates the conceptual problem in trying to assess the moral conduct of people in circumstances where all choices are problematical. The phrase “the gray zone” was invented by Primo Levi, in part, to describe this situation. Kasztner and his train will forever be stuck in this gray zone.

Suggested further reading includes Kasztner’s Train: The True Story of An Unknown Hero of the Holocaust by Anna Porter (Walker and Company, 2007) and Kasztner’s Crime by Paul Bogdanor (Transaction Publishers, 2016).