During the Holocaust, the Nazis ran more than 30,000 labor and concentration camps. Six death camps in Poland were designed for efficient mass murder of Jewish people. Learn more about life in these camps, as well as about The Final Solution in the video below.

Be sure to check out the many resources on this page: lesson plans for classroom instruction, an annotated transcript of the video, survivor testimony, and photographs of Steve Lewkowicz’s uniform from Buchenwald.

At the Holocaust Memorial Center, we have hundreds of artifacts and other items on display for our visitors to learn from. Unlike reading panels on a wall or paragraphs in a textbook, these objects tell stories and provide an opportunity to directly connect with the past. We want to know what it is, where it came from, who it belongs to. They provide clues to guide our study and help us find lessons for today.

This blue and white striped uniform was worn by Steve Lewkowicz during the Holocaust. When Steve was 14 years old the Nazis invaded his hometown in Poland. After a few months, Steve was taken away from his family and never saw them again.

When the Nazis came to power in 1933, they established the first concentration camps to imprison enemies of the state. Many of the prisoners were targeted because of their political views and ethnic backgrounds, or because they were considered social deviants. Communists, socialists, Roma, Jehovah’s Witnesses and gay men were all imprisoned.

Steve passed away several years ago, but his memory and experience live on through this artifact.

On November 9th and 10th, 1938, a wave of anti-Jewish attacks or pogroms took place in Nazi occupied Germany, Austria, and the Sudetenland. On this horrifying night called, Kristallnacht, the Night of Broken Glass, hundreds of synagogues were burned, 7,500 Jewish owned businesses were vandalized and 30,000 Jewish men were arrested and sent to Dachau, Buchenwald, Sachsenhausen and other concentration camps.

By the end of World War II, tens of thousands of camps had been established all over Europe.

Jews who had been living in ghettos or other camps were transported by train to these killing centers. Upon their arrival, most were sent directly into the gas chambers. Some were selected for slave labor.

When Steve was taken away from his family, he was sent to work as a slave laborer in several different camps. At every camp the conditions were horrible. Prisoners were given very little food, a cup of watery soup and a piece of bread, each day. On such empty stomachs, they were forced to perform very difficult work, such as working in factories, digging in coal mines, building railroads and cutting down trees. Often, prisoners were given striped uniforms to wear. On a bitter cold winter day or in the sticky summer heat they wore the same uniform. Prisoners were not called by their names. Instead they were issued an identification number. At Auschwitz, the number was tattooed on their arm. At other camps, it was sewn onto their uniforms.

Despite the terrible conditions, brutality and dehumanization, prisoners found ways to maintain their humanity and dignity. They whispered prayers to secretly celebrate holidays, encouraged one another to keep going and hid forbidden objects in their clothing and barracks.

Towards the end of the war, the allied troops had advanced toward Germany from the East and West. Germany was surrounded. The German troops began to retreat. To cover up their crimes, Nazi camp leaders forced the inmates to walk to concentration camps in Germany. These forced marches have come to be known as death marches.

Steve was sent on a death march from an Auschwitz sub camp in Poland to Buchenwald located near Weimar, Germany. When he arrived there, he was given this uniform and identification number 128923. The US Army liberated Steve from Buchenwald on April 11th, 1945. He was sent to a nearby hospital to recover from his injuries and regain his strength. Eventually, he connected with relatives in Michigan and came to live with them.

Steve Lewkowicz was born on December 2, 1925 in Boleslawiec, Poland. His father, Moshe, was a businessman that used to buy and sell chickens. His mother, Bluma, was a housewife and took care of Steve and his two sisters, Gita and Liba. As a young boy, he went to Polish school in the morning. After eating lunch at home, he would then go to the Jewish school, or cheder, in the afternoon.

When the war broke out in 1939, Steve recalls hearing the Polish army going towards the German border. Out of fear, they hid in a cellar in the back of their house. The Germans entered their home and walked around, but did not find them. They remained in hiding for a few days while the Germans burnt down houses and buildings. Luckily, their home was spared, but the family decided to leave. After spending a night at an abandoned farm house, the Germans found them and told them to go home, so they went back to their house. Steve had an uncle whose house was destroyed. As a result, he moved in with Steve’s family. Two families – one with three kids and one with two – all lived together in a two-room house.

Everyone was made to wear a yellow star and perform manual labor. They had a curfew and were not allowed to walk on the sidewalks. While their town was not an official ghetto, it operated like one. His family was able to make arrangements for Steve to work on a nearby farm. When he would come home on Sundays he would bring back bread, milk, and eggs for his family. Eventually Steve was discovered and was sent back home.

When deportations started, Steve was taken right away. That was the last time he saw his family. He was taken to a small transit camp, and then to several labor camps. In his testimony recording, he could not remember the names on any of the camps. He was eventually taken to Auschwitz. When he got there, he went through a selection and was tattooed with the number. After a few months, he was sent to Jaworzno, where he worked in the coal mines.
As the Allies made their advance in Poland, Steve was sent on a death march to Buchenwald where he worked in stone pits. Again, he was supposed to be sent on a death march, but he laid on a pile of dead bodies and was spared. A few days later, the camp was liberated by the US Army. He was taken by ambulance to a nearby hospital for treatment. Once his strength had returned, he went to the Landsberg DP Camp where he lived for roughly 4 years before immigrating to the United States.

Steve knew that he had an uncle in Detroit that was a baker. They were able to locate his uncle by working with the bakers union. In 1949, he traveled by boat from Germany to New York. He then took the train to Detroit. After two weeks, he began to look for a job. Since he did not know any English, his uncle completed his application to work at the Dodge factory in Hamtramck, Michigan. There, he was able to speak to his colleagues in Polish. In the evenings, he attended night school at Central High School in Detroit. Eventually, he switched occupations and worked at a glass business. Eventually, he became the sole owner of the company. He and his wife, Phyllis, have three children and many grandchildren. He passed away in 1997. 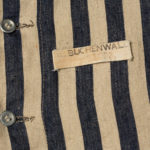 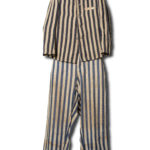 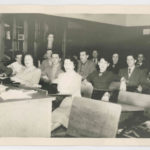