HomeInside the Glass CaseTrust No Fox

Daily life for Jewish people living in Germany began to look very different once Adolf Hitler and the Nazi Party came to power in 1933. Propaganda was a powerful tool used to spread Nazi Ideology and hateful antisemitic attitudes. Watch the video below to learn more.

Be sure to check out the many resources on this page: lesson plans for classroom instruction, an annotated transcript of the video, survivor testimony, and photographs of our museum’s copy of Trust No Fox On His Green Heath And No Jew On His Oath.

At the Zekelman Holocaust Center, we have hundreds of artifacts and other items on display for our visitors to learn from. Unlike reading panels on a wall or paragraphs in a textbook, these objects tell stories and provide an opportunity to directly connect with the past. We want to know what it is, where it came from, who it belongs to. They provide clues to guide our study and help us find lessons for today.

This artifact is a children’s book called “Trust No Fox on His Green Heath and No Jew on His Oath.” It was published in Germany in 1936.

Soon after Hitler and the Nazi party came to power in 1933, efforts were made to organize society according to Nazi ideology. In this ideology, people were defined by their race. Germans, or Aryans, were the superior race whereas Jews were inferior. They were evil and were the primary enemy of the German people. Life, therefore, began to look and feel very different for Jewish people in Germany.

There were boycotts against Jewish-owned businesses. Jewish professionals holding government jobs as lawyers and judges and even as public school teachers and professors were dismissed from their positions. Jewish doctors could not treat non-Jewish patients and public book burnings took place throughout Germany in which many books written by Jewish authors were burned.

Antisemitism, the hatred of Jewish people, had existed long before the Nazis came to power in Germany. The long-standing and deeply rooted stereotypes and beliefs were used as the core of Nazi ideology. Joseph Goebbels, the head of the Ministry of Public Enlightenment and Propaganda, was responsible for communicating Nazi messaging and ideology through the media. Films, books, radio broadcasts, newspapers, posters, and educational materials reached people all over the country. Across all of these platforms, stereotypes of Jewish people were spread to stir up suspicion, fear, and hatred.

In 1936, Julius Streicher published this children’s book. It was written by Elvira Bauer who at the time was an 18-year-old kindergarten teacher. The goal was to instill hate at a very young age. On the cover of the book, we see a drawing of a Jew and a fox. Throughout Nazi propaganda, both foxes and Jews are depicted as cunning creatures that could not be trusted. Each page of the book contains a nursery rhyme that describes Jewish people as ugly, sneaky, and frightening.

[Narrator] “We do not buy from Jewish shops,” says the mother to the child. “It is only German goods we buy. Remember that, my darling.” It’s going to be fine in the schools at last for all of the Jews must leave.

These words, images, and messages mattered. People of all ages were influenced by these ideas and their hateful thoughts and biased attitudes led to actions. Martin Lowenberg, a local Holocaust survivor and speaker at our museum, was born in 1928 in Schenklengsfeld, Germany. In 1936, when Martin was in third grade, his teacher falsely accused him of sticking his tongue out at a picture of Hitler. In response, his classmates beat him up. The hatred they had learned turned into violence. After this incident, Martin’s parents sent him to a Jewish boarding school 150 miles away from home. Martin continues to share his story at our museum today to help us understand the dangerous consequences of hate.

About Trust No Fox

Trust No Fox on His Green Heath and No Jew on His Oath is an antisemitic children’s book, which was published in 1936 Nazi Germany by Stürmer Verlag, a publishing house owned by Julius Streicher, the founder and publisher of Der Stürmer tabloid. The original German title refers to a 1543 pamphlet by Martin Luther, (On the Jews and their Lies). In Nazi German propaganda, both the fox and “the Jew” were seen as cunning creatures, neither of which could be trusted. The book was written by Elvira Bauer, an 18-year-old kindergarten teacher and Nazi supporter, and was illustrated by Fips (the penname of Philip Ruprecht), a frequent contributor of antisemitic cartoons to Der Stürmer. In ten nursery rhymes of propaganda, “Bauer wrote the book to explain Nazi racial ideology and expose Jews as evil creatures who cannot be trusted”, according to the United States Holocaust Memorial Museum. Bauer portrays “the Jew” as the devil, the murderer of Christ and Germans alike, a shifting yet unchanging being, who cheats, corrupts, and defiles the good, hard-working German. In this piece of children’s literature, for all intents and purposes, “the Jew” is the antithesis of the German, and all for which he or she stands. The book concludes with a proposed solution, to rid the Jews from Germany, sending them back to the land from which they came. Each nursery rhyme is accompanied by antisemitic illustrations that visually convey Bauer’s messages.

***This is one of two virulently antisemitic children’s books illustrated by Fips under Streicher’s publishing house. According to Randall Bytwerk of Calvin University, approximately 100,000 copies were printed, many of which were used in schools across Nazi Germany.

Bauer, Elvira. Trust No Fox on His Green Heath and No Jew on His Oath. Illustrated by Philip Ruprecht, and translated by Randall Bytwerk. Nuremberg: Stürmer Verlag, 1936. Translated in 2003. https://research.calvin.edu/german-propaganda-archive/fuchs.htm. 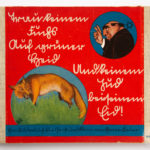 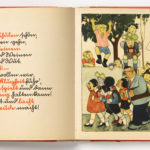 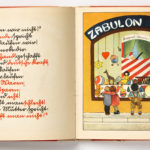