HomeNo one knows what happened to six-year-old Rolf Hess

The Holocaust tragedy keeps resurfacing. In 2010, a gentleman with no foreign accent arrived in the Library and after mustering great courage, announced, “I am a Holocaust survivor.” He had come to the Library to see if he might find out about his background.

He identified himself as Rolf Hess from Malsch, Gemany. He remembers that as a young child, he was deported to a nearby town with his grandfather, Si 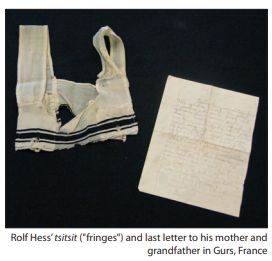 mon Hess, and mother, Rosa Hess, and was separated from them, possibly in a police station. From there he recalls boarding a train and being put into a children’s home, where he maintained written contact with his mother and grandfather.

We gave Hess the Library Archive copy of the memorial book for Malsch. There were quite a few Hesses mentioned, but he did not recognize any of the names…at first. He decided to return with some documentation.

A week later, Hess returned with 63 letters and some other items in a box. He had received the letters from his mother and grandfather, “Mutty” and “Oppa,” from the Gurs concentration camp addressed to the Maison des Pupilles, Aspet, France. For the most part, the letters inquired about his health and well-being, but in one of the later letters, there was detailed biographical information about his grandfather and mother “in case he should need it.” The censor had blacked out some phrases and occasionally Mutty wrote “regards from the whole barrack.” The final letter, dated July, 1942, was one which he had written to his mother and grandfather in German. It was returned to him because his mother and grandfather were no longer in Gurs. The box contained carefully-mended tsitsit (the four-cornered garment Orthodox Jewish males wear), which he remembers wearing in Malsch, in the children’s home, and on the ship. The other memento was a colored drawing he did en route to the United States showing two ships, one pursuing the other, with the second ship flying a Nazi flag. Amazingly, Hess does not remember any German and was unable to read the Malsch memorial book or any of the letters, including the one he himself had written!

Now, we thoroughly searched the Malsch book and noted every Hess mentioned. There, among the discussions of several Malsch Hess families, was the statement “No one knows what happened to Rolf Hess at the deportation. Equally unknown is the fate of…Rosa Hess, who must have disappeared in Auschwitz…as well as Simon Hess.” Yet, Rolf Hess stood here before us, alive and well, unaware that he, his mother and grandfather had been recorded as missing persons. Hess continued his research and found in the Memorial to the Jews Deported from France 1942-44 that his mother and grandfather were sent to Auschwitz on August 10, 1942, with Convoy 17.

Hess’ grandfather’s brother in Ohio had tried to secure proper documentation for his family to come to safety in the United States. He was partially successful; Rolf Hess came to the United States via Portugal, where he and 38 other children were put onto the Portuguese steamer Nyassa with 800 other refugees.

Unfortunately, the papers arrived too late for his grandfather and mother. Hess has commissioned someone to translate the letters and he is contacting the Malsch City Archives and the author of the memorial book. He is trying to find a fellow shipmate who travelled with him across the Atlantic. After all these years, he feels that it is time to fill in the missing pieces of his family history, for himself and his family. He is grateful to the HMCZFC for having the resources to help and making them available to him.

This article is from the Summer 2010 Newsletter from the Holocaust Memorial Center Zekelman Family Campus.